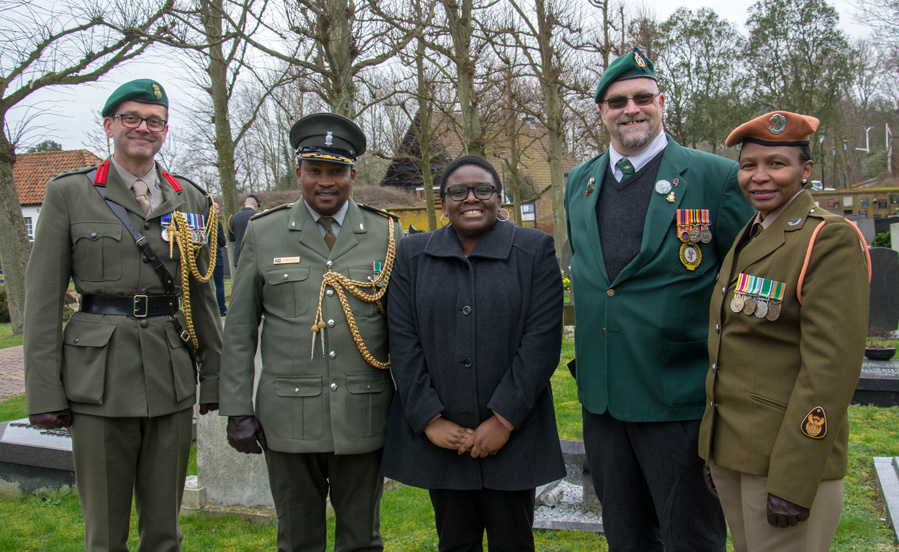 Following a welcome address by South African Deputy Military Attaché, Lt. Col. A Mafofololo, Rev. Andrew Taylor led a dignified service of remembrance, which included a reading by Zeb Ngobese of the poem in isiXhosa Ukutshona Kukamendi (The Sinking of the Mendi) by S.E.K. Mqhayi (see below).

Ms Olitha Lebelo, Counsellor Political at the Embassy of the Republic of South Africa to the Kingdom of the Netherlands greeted diplomats, dignitaries, and military attachés from several countries including Great Britain and the USA.

In his address, SA Legion EU Branch Chair, Lgr Andrew Bergman highlighted that “on the 103rd anniversary of the sinking of the SS Mendi, and in celebration of South African Armed Forces Day, we also commemorate 25 years of democratic defence – 25 years during which the South African National Defence Force has already built-up a track record of distinguished service, especially as part of international peacekeeping missions in Africa.

“This is something of which all South Africans can justifiably feel proud, but such a record of distinguished service always comes at a price, so that once again the 21st Century has already sadly seen South African soldiers who have fallen on a foreign field,” he pointed out.

The gathering was also addressed by local Noordwijk historian Mark Sijlmans who has done extensive research and helped to identify the SS Mendi casualties who lie in his city’s general cemetery.

After the service, pipers, a band, and a bugler from the Dutch Armed Forces accompanied a wreath laying at the SS Mendi graves by the Mayor on Noodwijk, Alderman Wendy Verkleij, Ms Olitha Lebelo and Lt. Col. A Mafofololo on behalf of the Republic of South Africa, Lgr Bergman on behalf of the SA Legion, and several of the military attachés present.

Last Post was sounded followed by two minutes’ silence, and the National Anthems of the Netherlands and South Africa.

Following the event at the cemetery, the South African Embassy hosted an informal lunch with South African wine at Noordwijk’s modern sports centre.

Yes, this thing flows as a normal thing from that.
The thing we know is not scared of that;
We say, things have happened as they should have,
Within our brains we say: it should have been so;
If it hadn’t been so, nothing would have come right.
You see Sotase, things came right when the Mendi sank!
Our blood on that ship turned things around,
It served to make us known through the world!

The British didn’t buy us with begging;
They didn’t seduce us with long strips of meat;
They didn’t bribe us with things as high as the stars,
They didn’t bribe us with profits.
We say unto those who died, you were Africans,
Those who died in the country of the rising sun,
Those who died in the country of the setting sun,
You didn’t die out of subservience for the king,
Nor because you wanted to kowtow to Britain.
On the day you left home, we talked,
On the day you left, we promised to look after your families,
On this day we shook hands, our eyes were wet.
On this day mothers cried, you fathers sobbed,
On this day you left the mountains of your birth,
You left the rivers of our country behind
We said to you, going there as dark-skinned men,
We said: “You are our sacrifice from here.”

Could we have sacrificed anything more precious?
What did it mean to sacrifice a village?
Was it not giving the bull calves of your homestead?
Sending those very ones who loved you as a nation?
We’re talking deep now; we have added our voice,
Proudly we are part of those opening the road to freedom.
In the way Abel was the sacrifice of the earth?
In the way the Messiah was the sacrifice of heaven?

Translated from isiXhosa by Antjie Krog