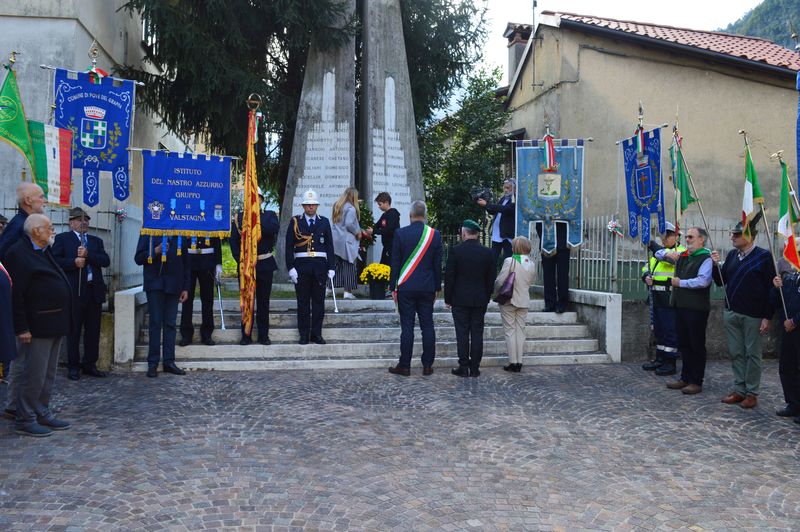 In the period of the 20th to the 29th September 1944 a number of massacres and reprisals (Operation Piave) took place in the Grappa region of Italy when the Axis forces attempted to quell the partisan activity.

Although the total number has never been ascertained, it is calculated that over 300 people were murdered and an unknown number deported.

In the town of Carpane a court of sorts convened and passed judgement on captured partisans.

On the 21st September an unknown young Italian was shot.

On the 23rd September Giuseppe Mocellin and Luigi Ferraris were shot.

On Tuesday 26th September in the (now) Avenue of Martyrs in the town of Bassano del Grappa 31 partisans were hanged from trees and left for the inhabitants to see.

These names are listed on the roadside memorial in Carpane.

Gianna Giglioli, the wife of Angelo Vale refused to be sent to work in Germany and demanded she share her husband’s fate.

The Axis obliged and shot her too.

When her body was examined she was found to be four months pregnant.

Every year the inhabitants of the region hold a memorial service to commemorate this event.

It was only in 2008 that an Italian researcher, Sonia Residori, managed to uncover the identities of the Allied soldiers.

During research into the Italian Campaign the Regional Chair of the SAL, Cameron Kinnear, noted that two of these soldiers were named Kinnear, and he started corresponding with Sonia Residori.

As a result an invitation was extended to Lgr Kinnear and his wife to attend the 75th Anniversary of the massacres, to be held on the 5th October 2019.

It must be noted that the Kinnears were very warmly welcomed and treated exceptionally well during their stay in the region.

After a church service led by a senior church official from the region, short ceremonies were held at the main memorial and at the spots were the shootings took place. The entire town and the main road through the area was stopped, and the attendees progressed to the various spots in a sombre yet fraternal mood.

At the spot where the Allied soldiers were shot Lgr Kinnear laid not only a wreath from the SAL, but also small crosses were laid for the two Kinnears.

After the wreath laying services were completed, a local hall was filled to overflowing to hear the speeches presented by Mayor Ferazzoli, the Researcher Sonia Residori and Cameron Kinnear, Regional Chair of the SAL England and Europe.

All of the surrounding towns were represented by their Mayors in support of the Mayor of Valbretta / Carpane, Luca Ferazzoli.

The parade was led by Ottorino Bombieri, Chair of the National Partisans Association (ANPI) with support from the Chair of the National Association of Combatants and Veterans of Valbretta, Ermanno Bombieri and the President of the ANPI of Bassano, Gianandrea Borsato a well as seven regional Mayors. Representatives of the Services were also present.

Link to Carpane Roll of Honour

This article includes information obtained from the Research and Articles compiled by Sonia Residori.

She has not only compiled detailed records of these events, pursued and enabled the identification of the South African soldiers, but was also involved in the tracking down of the German Officer in charge of the Bassano del Grappa “Avenue of Martyrs” executions, Karl Franz Tausch.