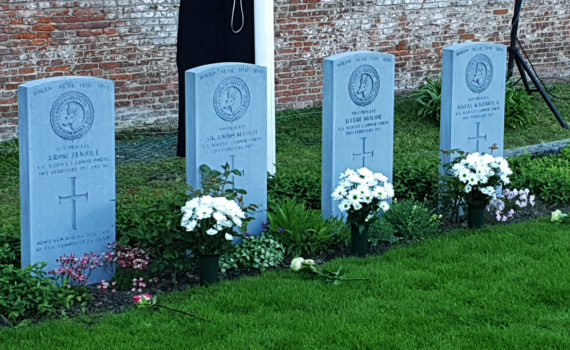 NOORDWIJK, THE NETHERLANDS  –  Every year on 4 May, the Kingdom of the Netherlands marks its national Dodenherdenking (remembrance day), to commemorate civilians and soldiers who were executed or fell in WWII and subsequent conflicts.

The date is a moment to pause and reflect on the civil liberties that the Dutch enjoy today – freedom that they realise and respect was hard-won and should never be taken for granted.

Across the country, local school children place flowers on the many war graves scattered far and wide, in local cemeteries as well as those of the Commonwealth War Graves Commission. These include many South Africans, especially airmen, as it was necessary for the RAF bombers to overfly the Netherlands on their way to and from raids on Germany. Especially on their return routes, many bombers succumbed to FLAK and fighter damage, and crashed into the Dutch polders.

In addition to a central nationally televised event on Dam Square in Amsterdam, attended by the royal family and heads of government, simultaneous events are held in towns and cities across the country, where two minutes’ silence is observed at 20h00.

Though neutral during the First World War, the Netherlands was not spared from hosting the casualties of a war that was fought within earshot.

Six casualties of the SS Medi (troop ship sank off Isle of Wight on 21 Feb 1917 with the loss of 616 souls) lie in the Commonwealth War Graves Commission section of the General Cemetery of Noordwijk, just north of The Hague in the Netherlands, among ranks of mainly Royal Navy personnel whose bodies, like those of the SS Mendi casualties, were washed-up on the Dutch coast.

Over the past six years, the municipality and Aldermen of Noordwijk have been of constant support to the SA Legion and the South African Embassy in The Hague with regard to our annual SS Mendi remembrance service and parade now held each 21 February at the Noordwijk cemetery. A strong bond has developed between South Africa, and this picturesque town on the Dutch coast that has so loyally nurtured the graves of Private Abraham Leboche, Private Arosi Zendile, Private Sitebe Molide, Private Natal Kazimula, and Private Sikaniso Mtolo, for more than 100 years.

It is therefore only fitting that the South African Legion Europe Branch shows its solidarity with Noordwijk as the town remembers those who fought and died for its freedom.

This year, the South African contingent was significant, first at a remembrance service in the Maria Ter Zee church, followed by a dignified silent march, past the war graves in the general cemetery, to the Noordwijk war memorial nearby.

The following day, 5 May, is observed across the Netherlands as Bevrijdingsdag, marking the liberation of the Netherlands from the German occupation as WWII drew to a close.

It’s a day celebrated with much gusto (and Heineken and Grolsch), but not before having first acknowledged and paused to reflect that the freedom the country enjoys was achieved at the cost of many brave lives.

At the going down of the sun, and in the morning,

We will remember them…

Caption of featured photo above: These are four of the SS Mendi graves in Noordwijk. The town’s school children placed flowers at every one of the WWI and WWII Resistance, Allied and Commonwealth war graves, as they do each year.