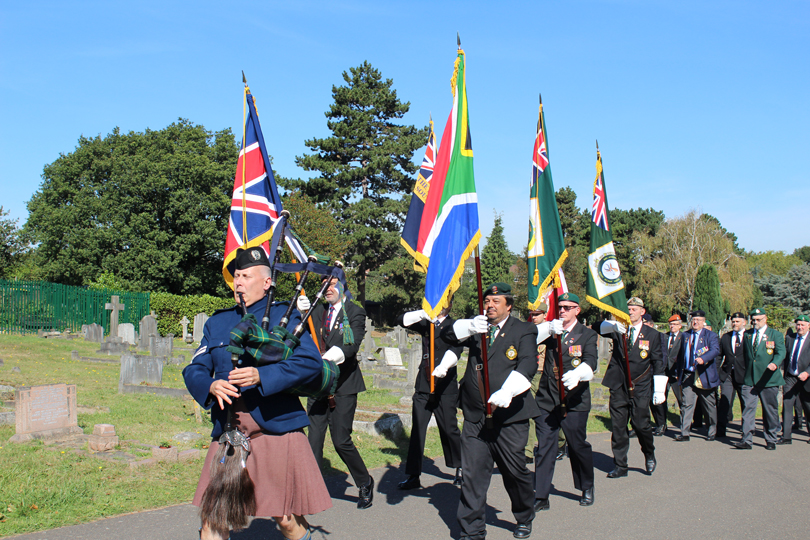 RICHMOND UPON THAMES – On Saturday 15 September, Legionnaires from the South African Legion of Military Veterans (UK and Europe), the Royal British Legion (SA Branch), were joined by delegations from the Polish Embassy, the Polish Airmen’s Association UK, and M.O.T.H. (Gazala Shellhole), to commemorate the 75th anniversary and honour the memories and sacrifice of the Allied airmen who participated in the Warsaw Airlift, where from 4 August to early September 1944, 205 Group RAF at Foggia, Italy, under the command of Maj Gen James (Jimmy) Thom Durrant, flew 196 11-hour night sorties from Brindisi and Foggia in Italy with B-24 Liberators, to drop supplies to the Polish Uprising in Warsaw.

The occasion further served to remember the Battle of Square Hill*, fought in Palestine from September 19 to 21, 1918, when Cape Corps troops engaged with Ottoman Turkish forces in what were to be the final months of the First World War.

The service took place in the chapel at Richmond’s East Sheen cemetery, and the opportunity was also taken to dedicate a new Standard for the SA Legion Europe Branch. Standards of the South African Legion (UK), the Royal British Legion (SA Branch), and the Polish Airmen’s Association UK, all formed part of the standard party.

The service was conducted by SA Legion Chaplain, Lgr Craig Esterhuizen. He emphasised from the beginning of his address that the Warsaw Airlift was a humanitarian mission, not a strategic one. The pilots knew they were not going to change the course of the war for the Allies, but they were acting to prevent starvation and the annihilation of Warsaw’s population and the Polish Home Army.

Indeed, these brave pilots were denied flyover rights over Russian-held territory and were fired upon by their Russian allies if they strayed into their airspace. The 2,600-km round trip from their Italian bases at Celone and Brindisi was fraught with danger and at least 360 airmen and 41 British, Polish, South African, and US-crewed aircraft were lost. As Padre Esterhuizen said, it was indeed an act of love and sacrifice to participate in such a mission.

After the Padre’s address, a poem which honours the Cape Coloured soldiers who fought so bravely at Square Hill was read by Anja De Vries **.

A dark and haunting poem honouring the wartime sacrifices made by Poland *** was read, followed by the singing of the South African, British and Polish national anthems. The singing effort was greatly helped by the choir.

After the service, the legionnaires and standard bearers, led by a piper marched to the South African Cenotaph for a wreath-laying ceremony.

A medal parade was then held to present the Pro Patria Medal (PPM), Southern Africa Medal (SAM), and General Service Medal (GSM) for service during and after the Border War to two Legionnaires.

Polish Deputy Defence Attaché, Col Czerniak, was then invited to join Lgr Cameron Kinnear to take the salute as the standards and legionnaires marched past the cenotaph.

After the formalities ended, a social was held at the Royal British Legion Club in Teddington, where Lgr Lee Greed ensured no one went thirsty and Lgr Johan De Vries provided his superb boerewors rolls.

* Battle of Square Hill
This year marks the milestone centenary of a historic battle which is not yet at the forefront of general consciousness in the United Kingdom. The legion playing its part to raise general awareness.

During the Battle of Square Hill in 1918, Cape Corps soldiers were able to shine in their first battle with Turkish soldiers in Palestine during the final months of the First World War.

During the night of 18 September 1918 the 1st Cape Corps themselves had taken 181 prisoners. Having come under “fairly persistent counter-attack” they were said to have battled with bayonets in the “strictest silence” and that they carried out orders implicitly.

Following the war, a monument was built in Kimberley. The gun captured at Square Hill stands there still… but of similar monuments in Johannesburg and Cape Town, nothing but promises materialised. The annual Armistice Day/Remembrance Sunday parade at the Johannesburg cenotaph drew a large crowd of Cape Corps veterans and descendants for decades and was widely known as the Square Hill parade, but even that memory has now faded.

The battle on that night claimed the lives of L/Cpl S Visagie and Pte S Gobey. Further casualties the next day were Pte J Jonkers, Pte G Groep and Pte D Hahman.

As legionnaires we carry the flame of remembrance…

** Once upon a time, a battle was fought in a Biblical land.

With its cloud of skirmishers in advance,
With now the sound of a single shot snapping like a whip, and now an irregular volley,
The swarming ranks press on and on, the dense brigades press on,
Glittering dimly, toiling under the sun—the dust-cover’d men,
In columns rise and fall to the undulations of the ground,
With artillery interspers’d—the wheels rumble, the horses sweat,
The army corps advances.

A great victory was won and their general was proud.

A Cape Corps helped break through to Damascus

We are waiting for you, red plague

you will be salvation welcomed with revulsion

we are waiting for you, our eternal enemy

bloody murderer of so many of our brethren

Your red, victorious army has been lying at the bright feet

of burning Warsaw and is feeding its soul with bloody pain

of a handful of madmen who are dying in the ruins.

Following the outbreak of the First World War, South Africa, as a British Dominion, formed and mobilised the South African Overseas Expeditionary Force, as its contribution to the war effort. This force consisted of: The SA Infantry Brigade, SA Mounted Brigade, SA heavy Artillery Brigade, SA Field Artillery Regiment, SA Native Labour Corps, SA Field Ambulance unit, SA Corps of Engineers, SA Signals Company, and the SA Medical Corps – a total force of about 232 000, each one of them volunteers.