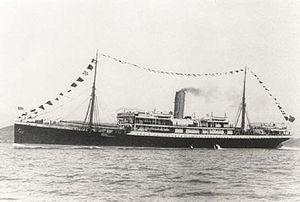 On 21 February 1917 at 05:00, the SS Mendi was struck and cut almost in half by the Darro, South West of the Isle of Wight, causing the SS Mendi to sink. A total of 607 Black South African soldiers and nine of their white countrymen, drowned in the disaster.

These men met their fate with African dignity. It is recorded that the Reverent Dyoba Wauchope Williams, to calm the panic and quieten the men in their hour of death, captured their attention by raising his arms aloft in the true tradition of his race, as he cried out in a loud voice: “Be quiet and calm, my countrymen. What is happening now, is what you came to do… you are going to die, but that is what you came to do. Brothers, we are drilling the death drill. I, a Xhosa, say you are my brothers… Swazis, Pondos, Basotho… so let us die like brothers. We are the sons of Africa. Raise your war cries, brothers, for though they made us leave our assegais in the kraal, our voices are left with our bodies.”

A short silence followed and then these soldiers who were from the mines, the kraals and the open veld, shed their army boots and started to dance the “dance of death” with all the vigour they could muster.

Some of the survivors were able to abandon the ship by lifeboats and some jumped into the icy waters. Survivors recollect soldiers singing and praying while they struggled in the sea enveloped by darkness.

On 9 March 1917, the stunned members of the South African House of Assembly rose in silence to pay tribute to the dead of the SS Mendi.