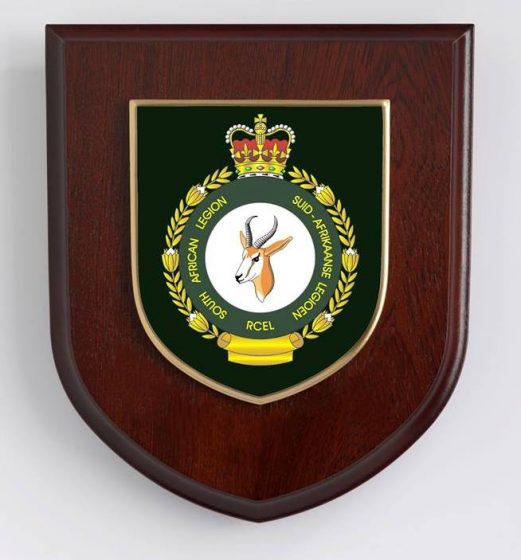 Sometimes, taking a wrong turn in cyberspace is not a complete waste of time. A few months ago, while searching for something completely different, I surfed-in on the website of Rowan Displays http://www.rowandisplays.com/

Pictures of their work reminded me of a lunchtime conversation that sprang up among Legionnaires admiring the array of regimental and association shields displayed across the breadth of Le Tommy Bar in Poziéres, following the SA Legion Somme Remembrance Ceremony at Thiepval in July.

The company offered to make a free preview mock-up if supplied with good artwork. I sent them a digital version of the Legion badge, and asked for two design options: one with a dark green background to mimic our green blazers, and another backed by the Murray of Atholl (modern) tartan. 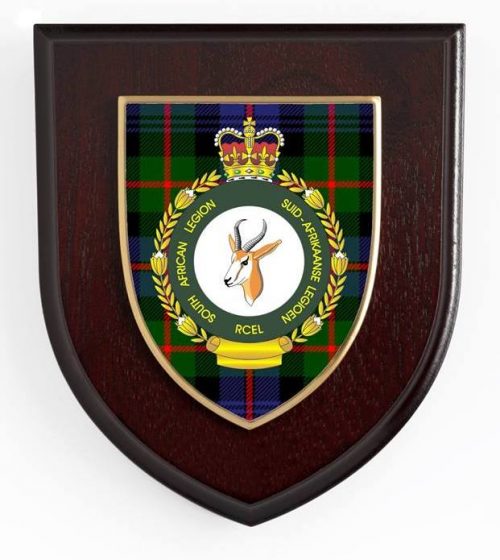 I was immediately impressed by the professionalism of their service, and received the designs a few days later. The Committee were unanimously divided when they saw them. “Both look great” was the consensus, so we resolved to approve both designs, with a preference for the medium mahogany backing shield.

There was also the option to emboss the shield, which needed a once-off die to be made, but the added cost would prove more than worth it.

The first order was placed in the nick of time to ensure delivery by our Branch AGM in London following the Cenotaph Parade on Remembrance Sunday. They were delivered to our Chairman’s home in Oxfordshire, and his reaction was so positive, I motored through from North London to collect them. Some were to be collected personally at the AGM, while others would be sent-off by mail.

Well, Rowan Displays certainly did us proud. They are of super quality, and can be displayed with pride in any office, mess, bar, or man cave.

The week after the AGM, Peter & Karen Dickens, and my wife Johanna and I travelled to Thiepval for the ceremony organised by the Royal British Legion to mark to mark the end of the Battle of the Somme.

Afterwards, we thawed our fingers and toes at Le Tommy Bar, where a South African Legion Shield now rubs shoulders with shields placed by regiments and associations from around the world. And it stands out!

Peter & Karen later presented one to the curator of the Delville Wood Museum. Shields have subsequently been placed in the Springbok Bar in The Hague, as well as Tjing Tjing South African restaurant in Amsterdam, both favourite meeting places for Saffas in Polderland.

The next batch of SA Legion Shields will be ordered soon. They are available to members only. We need to order 25 units to get the best price, so please email Andrew Bergman and let me know if you are interested in a dark green or tartan one. The price will be around £30 (including postage to a UK address).

Article by Andrew Bergman for the SA Legion UK & Europe.