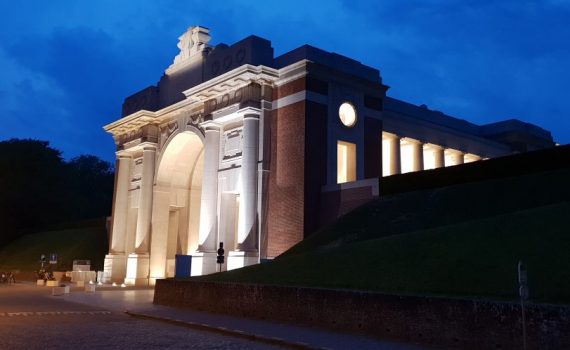 Every evening at 20:00 sharp, ever since 1928, the solemn and stirringly beautiful Last Post ceremony has been performed under the Menin Gate at Ypres that commemorates the many thousands of British and Commonwealth soldiers who were killed in the bloody battles of the Ypres Salient during First World War. On the walls of the memorial are inscribed the names of 54,395 soldiers – including South Africans – who died in the Salient but whose bodies have never been identified or found.

On 12 and 13 May, Ypres hosted the Kattenstoet (Cats Parade), a festive local carnival themed on cats, which was an extra attraction on this weekend.

South African Legion (Europe Branch) Chairman Lgr. Andrew Bergman arrived with his wife Johanna on Saturday evening and attended the Last Post Ceremony as a ‘dry run’ to recce the lay of the land. An advance email to the Last Post Association in anticipation of our visit yielded and invitation to lay a wreath, as well as the possibility (at the discretion of the Master of Ceremonies on the day) to deliver the Oration or Epitaph with an official delegation the following day. 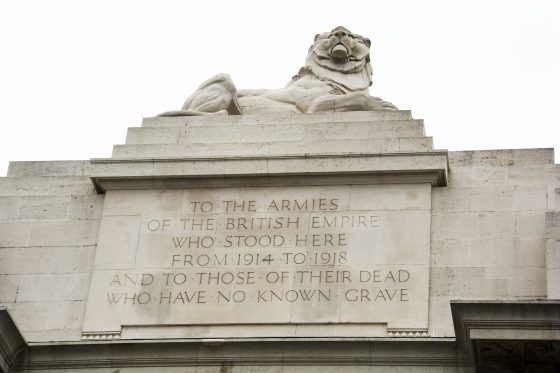 On Sunday, Lgr. Dave Wiseman and Lgr. Clint Olivier crossed the Channel and arrived in Ypres in time for the Cats Parade. We then got together – dressed in our parade kit – at a café opposite the Menin gate, where we were treated like minor celebrities.

We then moved to the Menin Gate, where the Master of Ceremonies asked Lgr. Bergman to deliver the Oration during the ceremony. Then a pleasant surprise: MOTH Alex Cromarty happened to be in the area touring with his family, which swelled our ‘band of brothers’ to four. 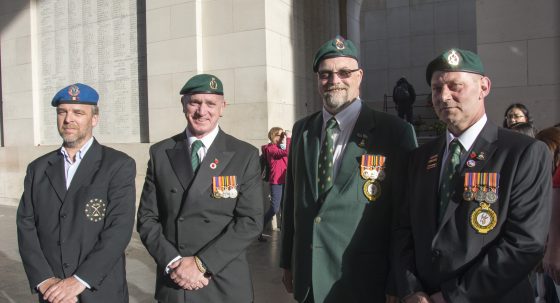 Our wreath-laying party fell-in three-abreast under orders of the Master of Ceremonies. Behind us were schoolgirls from Scotland and England, students from East Anglia University, and ancestors of the fallen, all waiting to pay their floral respects.

Opposite us, the Rochdale Festival Chorus gathered to provide musical accompaniment.

By now there was no more room under the vast arch of the gate itself, and spectators were spilling out into the approaching road on both sides.

“They shall grow not old…”

The sizable crowd fell silent when the buglers of the Last Post Association took-up their positions at the eastern end of the gate. Then, at 19:58, the buglers sounded the Rouse. On a signal from the Master of Ceremonies, Lgr. Bergman marched to the centre of the hushed arch, turned to face the buglers, and recited the Oration: “They shall grow not old…”

A minutes’ silence followed, and then in perfect unison, the buglers sounded the mournful Last Post. There were not many dry eyes in the house. 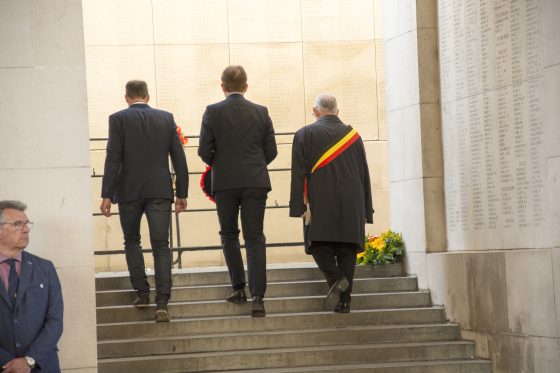 First to lay wreaths were the Mayor of Ypres and the Mayor of Singen, a German city that is twinned with Ypres. Both had been formally introduced to the South African Legion delegation at the start of proceedings.

We were the next wreath-laying party, and while we haven’t done much marching together, we did ok – the pictures show that our dressing never wavered, we kept perfect step. 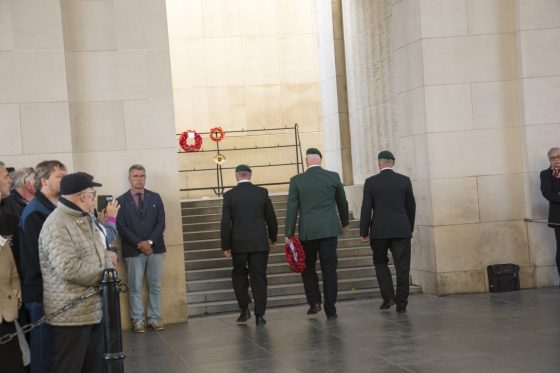 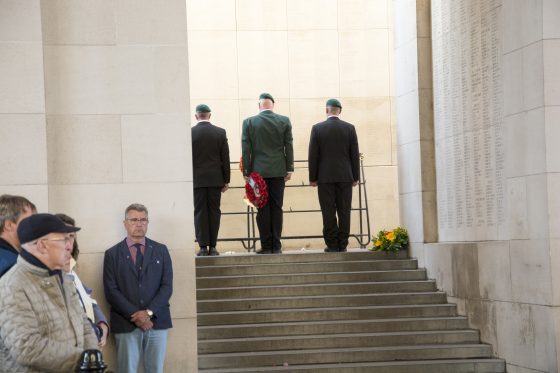 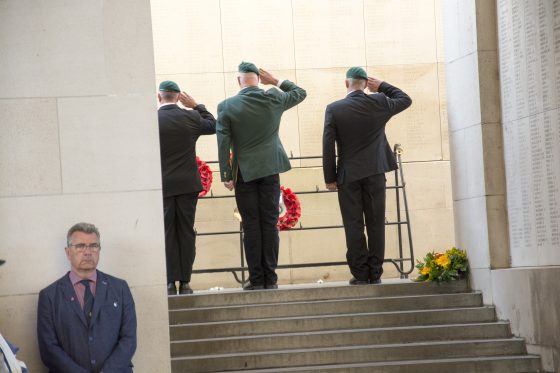 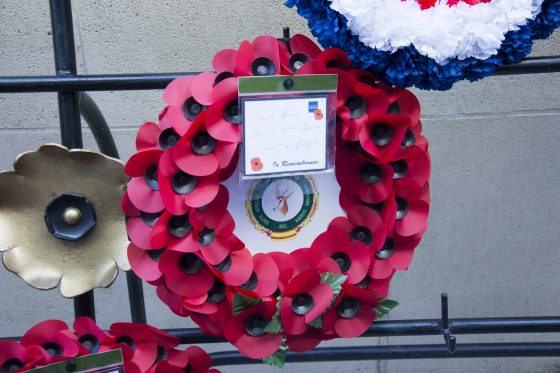 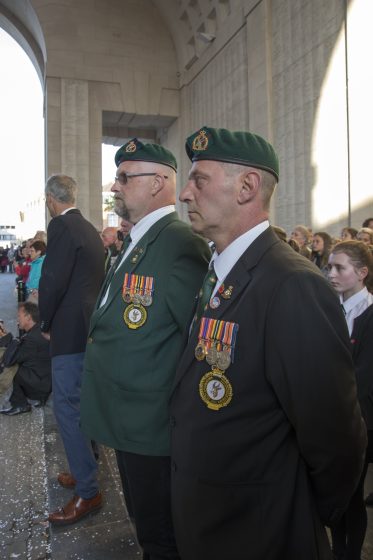 The buglers then sounded Reveille to signal the end of the ceremony. 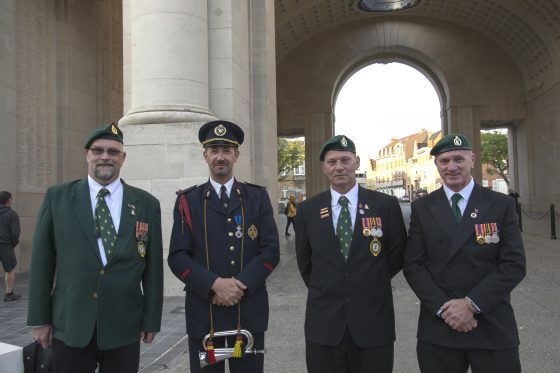 After the ceremony was over, it was time for networking. Legionnaires spoke to a Colonel (in civvies and ‘off duty’) from the Belgian Special Forces, and we mingled a while with the other wreath-layers in the afterglow of the dignified and solemn ceremony we’d all shared. 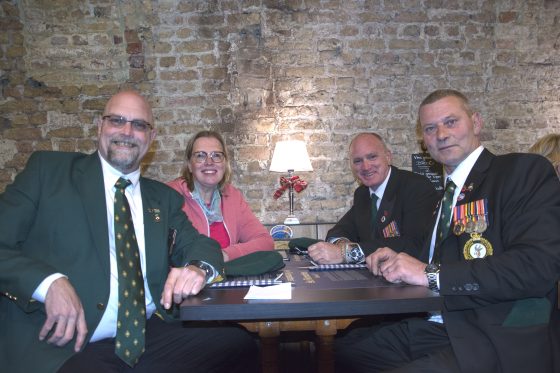 So after a successful round of shoulder-rubbing with the Great and the Good of Ypres and beyond, three Legionnaires and Johanna – who had resolutely defended her plumb photographic position from several assaults on both flanks to produce a superb photographic and video record – followed the city walls southwards to have supper at Brasserie Kazematten, which is established in the ancient casemates within the fortifications of Ypres. Many of the original features are retained. The staff treated us like kings and it proved a fitting end to a memorable day of remembrance and fellowship. 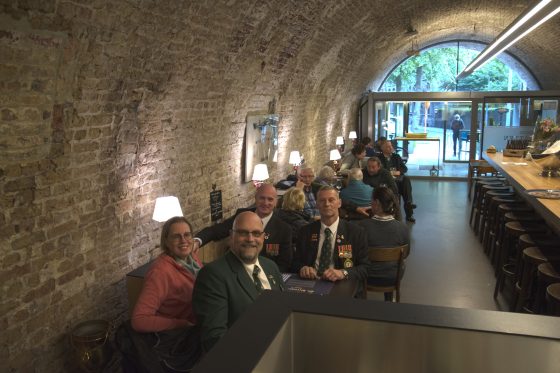