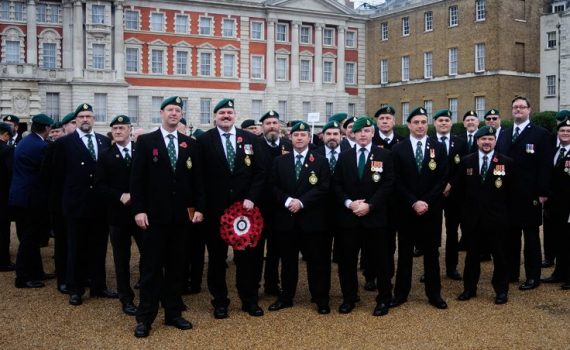 Put more than 10,000 people in one place at the same time, and there’ll be an inevitable ‘rhubarb, rhubarb, rhubarb’. So at 11h00 in Whitehall, it was the hush that struck home.

The Met Office originally promised heavy rain for Sunday morning. Thankfully, Mother Nature hastened Her schedule, so the downpour was over by Saturday night.

Column by column, contingents from every branch/outfit you’d care to mention were ushered through the Horse Guards Arches to fall-in at designated points in Whitehall. The SA contingent, assigned to Column D, followed some spit-and-polish Ghurkhas complete with Kukris. It was the usual ‘hurry-up-and-wait’.

A hubbub of more than 10,000 voices. Then, with a canon shot from Horse Guards, it seemed the entire world (even London’s ubiquitous pigeons) fell silent. In case anyone had forgotten, two minutes’ silence followed by Last Post reminded us why we were there.

Then, veteran Second Subaltern Elizabeth Windsor – Auxiliary Territorial Service (aka Queen Elizabeth II) emerged with the Duke of Edinburgh, Duke of Cambridge and Duke of York, and entourage to lay wreaths of poppies at the Cenotaph.

What was tangible at that moment was that Her Majesty was ‘one of us’.

This is something that British and most Commonwealth veterans have experienced year-after-year since 1918. However, until last year, when a small contingent fell-in, South African veterans have not been officially present since the country quit the Commonwealth in 1961. For a few years after that, the Royal British Legion agreed to lay the SA Legion’s wreath in their absence, but over time this eventually fell away and was forgotten.

With South Africa safely back in the Commonwealth in 1994, It was therefore all the more poignant that in 2014, to mark the Centenary of the outbreak of WWI, the South African Legion would again be represented at the Parade in such numbers.

Once the Royal contingent, Chiefs of Services and several Commonwealth High Commissioners, as well as the Irish Ambassador in his first Cenotaph appearance, had laid their wreaths, it was time for the march-past. It’s amazing how easily former soldiers still fall into a left-right cadence, and how quickly they still get out of step…

To the tones of the massed military bands playing ‘Pack Up Your Troubles’, past the Cenotaph to lay our wreath, through the crowds who never ceased to applaud, it was then that many of the SA Veterans got what Branch Chairman Peter Dickens would refer to in his after-parade speech (see below) as their ‘nugget’*.

Left wheel into Horse Guards Road. Now, a few of the crowd are dressed in WWI-vintage costume. As we approach Horse Guards Parade, Rear Admiral, the Duke of York (Prince Andrew) takes the salute.

It’s only once the columns fall-in once again on Horse Guards Parade that you realise the sheer magnitude of the event in which we’ve just taken part, with every conceivable branch of UK and Commonwealth forces represented.

After fall-out, everyone headed across St James’s Park to The Victoria pub opposite Victoria station. The Officers got lost, but the NCOs managed to usher everyone in the right direction.

It’s taken at least three years of negotiation, networking and coordination – driven largely by Peter Dickens, Adrian de Villiers and Andrew Williams to get the South African contingent re-admitted to the fold of Commonwealth veterans. For every veteran present, it felt good to be back.

Summary of speech made by Branch Chairman Peter Dickens after the parade:

When we started out I wanted to bring the experience of pride in service to guys who simply had never experienced it before – the SADF simply dismissed NSMs at the end of their service. There was no thank you, no “demob briefing”, no help in integrating and no service for physical and emotional scarring. For many of there was not even a pass out parade. Society in South Africa and the nature of politics equally ensure that pride in service in the country’s defence forces – whether UDF, SADF or SANDF is very hard to come by and continually tainted by politics – let’s face it there is certainly no “thank you” from the vast public in South Africa.

To the average British veteran (and Australian, American and Canadian) veteran public recognition and a simple “thank you” is something that comes with the job, and simply put we felt it was well due that South African veterans experience what is rightfully theirs to experience. I spoke of a *”nugget feeling” yesterday and if we achieved that in the veterans on parade – then job done really. It’s that nugget – that re-establishment of true pride in the service of your country that means everything.

The other purpose was to honour fallen – this was the first time since the South African Legion was excluded from the Cenotaph parade when SA left the commonwealth that we have managed to take a full veteran branch contingent back on parade, our spearhead contingent last year led the way and now we’ve re-established what’s long due to us. We can finally honour our fallen properly and rightfully – especially the South African sacrifice to crown – past and present. It’s a massive honour.

We marched down Whitehall whilst British veterans and public lined our route and sang “pack up your troubles in your old kit bag” and cheered us on – as they did to our Great Grandfathers, Grandfathers and Fathers before us – who marched on the same route off to war singing the same song. It speaks volumes, that lump of Portland Stone in the middle of the road is everything – it’s symbolic of so much sacrifice, and I for one was truly humbled. It’s not about honouring this or that unit, regiment or corps – it’s about the thousands of South African’s who paved that route we marched yesterday in their blood.

I hold in full pride the organisation founded in 1921 – both the RBL and the SA Legion whose sole purpose was the recognition of that sacrifice. The Legion is founder – the ground zero of Remembrance – the poppy and everything it stands for is the Legion’s custodianship – no defence force structure – current or outdated holds the custodianship of the fallen – the Legion does. I am massively proud to be associated to it and to wear its insignia and poppy – it’s an organisation that’s nearly 100 years old – and that speaks volumes too.

So thank you all who made yesterday such a special occasion and who make this organisation as special as it is – we’ve done our countrymen proud.