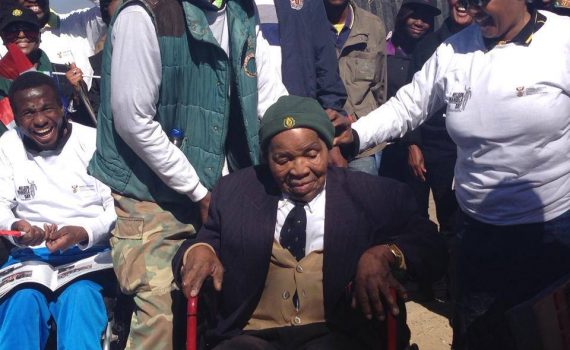 It is with a very heavy heart this morning that we announce the passing the Past Chairman of the South African Legion’s Soweto Branch. Lgr Frank Sexwale.

Frank Sexwale was one of our last remaining World War 2 heroes, having served with the South African Native Military Corps during the war and was very fondly regarded. To Colonel Tokyo Sexwale, Colonel Johnny Sexwale and General Mokoape we offer our deepest personal condolences.

On behalf of all the Legionnaires of the South African Legion of Military Veterans, we offer our sincere condolences to his family. Our words cannot take away the sorrow they must all be feeling at this time.

We hope our thoughts and prayers give comfort to his family that we as an organisation recognise and salute the work and efforts of Lgr Frank Sexwale.

Frank Sexwale as Chairman of the SA Legion Soweto branch steered the branch through the turbulent 1980’s. In 1986 he received a letter of commendation from the Legion for “transcending political pressure to keep the branch operational” in difficult and dangerous days. The branch facilities were actually expanded and sponsorship secured.

During the late 1980’s he also played a pivot role in securing Legion sponsored housing for Black veterans in Dube and Moroka districts on 99 year leases, when property ownership became legal for Black South Africans, arranging special meetings to explain the legalities of the lease and filing 140 applications.

In 1989, he became the first Black member of the Legion to address a Royal Commonwealth Ex Services League Conference (then the BCEL) conference in London, England.

On this trip in 1989 he also travelled to Hollybrook cemetery in Southampton, England to visit the SS Mendi memorial there and laid a wreath. He then went on to see artefacts from the Mendi kept at the Bembridge Museum on the Isle of Wight. He has been central to championing the memory of the men lost on the SS Mendi and remained so all his life.

We know how important the Soweto Branch was to him and we will try to ensure that it remains strong in his memory.

We will especially remember him at the SS Mendi Commemoration Service on Sunday 22nd February 2015 at 13h00 at the Avalon Cemetery.

At the going down of the sun and in the morning, we will remember him!