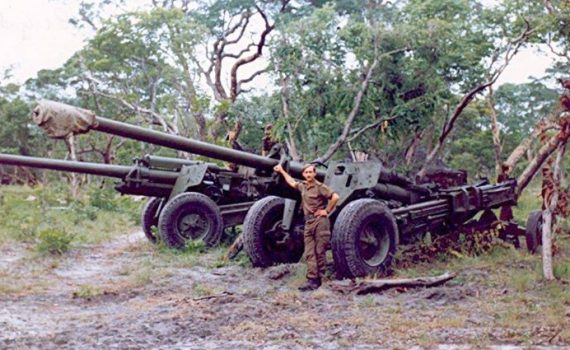 Bush War in Angola, now here we have a serious piece of captured Soviet artillery, taken by the SADF during Ops Hooper in 1988.

One can only appreciate the size of this weapon when one stands next to it. The hardware in question is the Soviet manufactured 130mm M-46 Artillery Towed Gun is manually loaded and was used in the Soviet Army since the 1950s. The M-46 was first seen in public in May 1954 and originally was known in the West as the M1954. Operation of the M-46 towed gun revolves around a crew of eight personnel. The M-46 is no longer in service with the Soviet Army but is still used by many armies in the world, mostly in Africa, Asia and the Middle East.

The M-46 has a barrel with a tied jaw horizontal sliding block breach with a ‘pepperpot’ muzzlebrake. The M-46 was developed from the M-36 130 mm naval gun used on ships and for coast defence. Ammunition included High Explosive Fragmentation, Armour Piercing Solid Shot, Smoke, Illuminating and Chemical shells. The High Explosive shells weigh some 33 kg. The maximum rate of fire for this gun is between 5 and 6 rounds per minute and about 70 rounds per hour over a maximum distance of 27,1km.

The barrel is mounted on a split-trail carriage, with deep box section trails and foam filled road wheels on the ground when firing and 50° (25º left and 25º right) of top traverse. The barrel can elevate from -2.5 degrees up to +45 degrees. The carriage is of the split trail type and is provided with a two-wheeled limber. The small armoured shield protects little more than the sights from the effects of muzzle blast and also provides a limited amount of protection from machine gun fire in anti-tank engagements. The gun has long and robust trails to provide stability when firing and a large detachable spade is fitted to the end of each when the gun is brought into action.

The gun is mounted on a two-wheeled split trail carriage with large sponge-filled rubber tires on each of the single wheels. For travel, it is provided with a two-wheeled limber and can be towed by a truck or armoured vehicle. The length of the gun is 5,4m, width is 2,2m and height is 1,8m. When travelling, the 130 mm barrel is withdrawn by a mechanism onto the right trail from battery to the rear to reduce the overall length of the weapon which can be safely towed by truck at a maximum speed of 50 km/h. The weapon weighs 8 450kg in the traveling position and 7 700kg in the firing position.

The M-46 towed gun has the OP4M-35 direct fire sight with a field of view of 11º and a magnification of ×5.5, as well as an APN-3 active/passive night sight. The M-46 fires case-type, variable-charge, separate loading ammunition.

Photo and caption thanks and courtesy to Graham Du Toit.