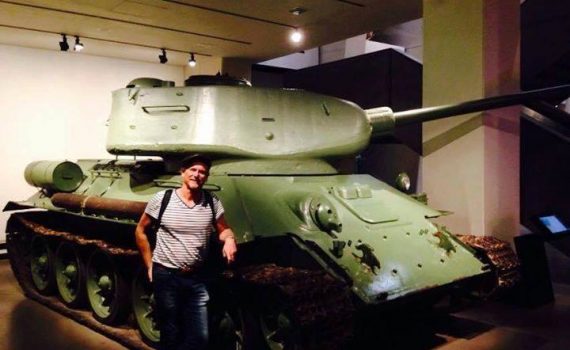 Decades ago we came barreling around a corner in Onjiva and drove into a T-34 tank. We were just a SAI section in a Buffel. This was a seriously unequal encounter. Like when Bismarck concussed himself bouncing off Eben Etzebeth.

You get two kinds of leopards, Oom Schalk Lourens said, one with more spots and one with fewer spots. But when you come across a leopard in the bush you only do one kind of running. And that’s the fastest kind.

The same applies to a T-34 tank. If you’re in a Ratel I guess it’s different. I hear they knocked out quite a few T-34s. If you’re an NSM BokKop in a Buffel, there’s nothing you learnt in bush-alley shooting that can help you.

You become acutely aware of your shortcomings when facing a Russian tank. A bunch of R4’s, an LMG and a shotgun don’t get you far. I suppose we could’ve used our pikstel knives as well but this wasn’t the time to check inventory.

They said don’t volunteer for anything in the army but in that moment your body commits treason against you. Your anus volunteers to open right there and then in the Buffel.

That’s a secondary and unimportant reaction. Your first response is to scream at the driver to Reverse! All of you, screaming the same thing simultaneously.

At the same time you duck down behind the steel plating. A T-34 cannon is pretty intimidating when you’re facing it from the front. And when it’s job is to erase you from the planet.

Not that ducking down helps much. There’s also that little round bubble on the T-34 with a short barrel poking out. You don’t know if it’s a 7.62 or a 20mm or even a 30mm cannon. Whatever, you suspect it can fire big chunks of Siberian lead right through your Buffel.

Christo, our driver, was now under severe pressure. He had a bunch of screaming, sh*tting maniacs behind him and a Russian tank in front.

Pressure wasn’t Christo’s thing. He was everyone’s buddy but had cracked in Basics. They were chasing us around with bed frames at 1am when Christo gave in. Sat down, lit a cigarette and told the Instructors to f-off. THAT was something to witness. Another story for another day.

Point is, he couldn’t take the punch, they said. Let’s keep him away from contacts. Make him a driver. So much for that theory. But now Christo had the chance to redeem himself. Pretty easy, you might think. Just hit reverse gear and back up around the corner.

Maybe his hesitation was influenced by 10 infantryman and a sergeant yelling at him in 3 languages – English, Afrikaans and NuweVloekerei. The last is when you spontaneously construct sentences consisting only of swear words. Bad ones that make you cry when confessing to the Dominee. He also cries.

Some of the swear words are old, the stock ones in your vocabulary. When they don’t work and Christo is grinding the gears trying to find Reverse, you spontaneously invent new words. These involve a combination of the driver’s, your own and everyone else’s mother, including the T-34’s.

The amazing thing is that this new language works. Christo hammered us into Reverse, popped the clutch and we shot backwards faster than a T-34 projectile goes forwards.

Straight into a line of Buffels behind us that veered left and right to avoid a crash. This caused Onjiva’s biggest traffic snarl-up since Antonio the Porto arrived with fresh veggies from Lubango.

On top of the skidding and sliding Buffels a company of BokKops jumped up shouting What’s Your Problem!?

Kak vraag sit. Go round the corner and see for yourself.

… So last month I walked around London’s Imperial War Museum looking at nice war things like Spitfires and bent steel girders from the World Trade Centre and suicide bomber vests and stuff. Relics from other people’s wars.

Then you walk around a corner straight into the barrel of a T-34 tank. Deja vu. Instinctively I ducked and shouted out the same NuweVloekerei I’d used many years ago. I didn’t know those words were still in my vocabulary.

A museum guide smiled and helped me off the floor. He told me the tank fought at Stalingrad where they defeated the Nazi Panzers. I told him I know this tank. And asked him to take the picture.