Let us die like brothers – the legacy of the SS Mendi

Daro, at almost three times Mendi’s weight, travelling ‘full ahead’ in fog conditions – not using her fog horn to warn shipping in the area or the appropriate lights – she rammed the troop ship with such force the SS Mendi sunk and was resting on the sea-bed within 25 minutes. The violent impact, nearly at right angles, left a gaping 20ft tear amidships instantly trapping more than 100 soldiers below decks who were unable to escape the rapidly rising water as the ship quickly listed to starboard.

Her crew, consisting 29 sailors, failed to launch sufficient life rafts for the 811 strong contingent of 5th Battalion South African Native Labour Corps (SANLC). In the dense fog and inadequate rescue effort that followed, many remained aboard the ship, unwilling to commit to an icy plunge.

They were reportedly exhorted by the Chaplain Rev Isaac Dyobha  who called them together to  die like warriors and brothers.

He said  “Be quiet and calm, my countrymen, for what is taking place now is exactly what you came to do. You are going to die, but that is what you came to do. Brothers, we are drilling the drill of death. I, a Xhosa, say you are all my brothers, Zulus, Swazis, Pondos, Basutos, we die like brothers. We are the sons of Africa. Raise your cries, brothers, for though they made us leave our weapons at our home, our voices are left with our bodies.”

Thus, together they danced a death drill, they chanted and danced on the tilting deck until finally being sucked into the vortex created by the sinking ship.

The reference to weapons was to the fact that the South African Government had agreed to send black men to assist the Allied forces as labourers, but, due to policies of the time, they insisted they could not be given weapons.

There were many more individual acts of bravery and selflessness in those terrifying early morning hours in the freezing water.  A catalogue of failures exacerbated the final outcome, the Darro for example made no effort at all to rescue the men in the water, and ultimately it was that many of these brave men had no experience of the sea combined with extended exposure to the frigid February waters, off St Catherine’s Light, that accounted for the unusually high death toll.

Fewer than 200 of the 840 souls aboard the SS Mendi survived.   The total toll on human lives lost that day reached a staggering 646.

Convention and prejudice meant this dreadful tragedy was not afforded appropriate recognition by respective Governments in South Africa and the United Kingdom.  South African officials during these years demonstrated their unwillingness to highlight black people’s wartime contributions by withholding medals and reasonable post-war recompense to ‘non-combatant men’ deemed somehow less valuable. Particularly poignant was that South African Labour Corps men, drawn from a broad spectrum of backgrounds, had readily volunteered their services to support the British Crown’s war effort on the Western Front in the hope it would win them greater political concessions at home. The reality was that remarkably little changed for 7 decades.

This however is now been redressed and today recognition is been awarded and these fine brave men are been honoured at last.  The South African Legion is one of the organisations which has taken the lead in highlighting this significant event – both in South Africa and abroad.  In the United Kingdom, the South African Legion branch located in the England honoured the Mendi fallen on the 24th February 2013 in Portsmouth in a specific ceremony dedicated to the men buried there.

As called out by Rev Isaac Dyobha ‘let us die like brothers’ but a few days after Mendi sunk, 9 men washed ashore and were buried at the Milton cemetery in Portsmouth, most poignantly – here too they where buried as brothers.

The eight South African labour Corps men are buried together – sharing the same graves, one officer – Lieutenant R.A Mactavish is buried here too just a little up the same lane.  The grave register shows on the first names of the Labour Corps men only, no rank, no surname – they are described in the register as ‘an African Native’, they are intervened directly to earth – no coffin was afforded these ‘native African’s.   These are paupers graves. 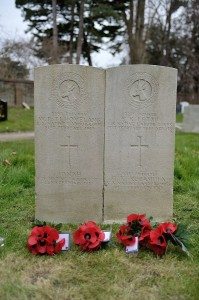 During the ceremony held by the South African Legion – United Kingdom branch, as the honour roll was read, members of the SA legion at each headstone laid an individual garland.  The colours and standards of The South African Legion, Royal Navy Association and the Fleet Air Arm Association where dipped to the ground in honour of the men whist the last post was played.

Honours where also paid to a the small number of other victims of the Mendi who came ashore elsewhere.  However in reality most did not, almost a third of all the 1900 names listed at Hollybrook Naval Memorial in nearby Southampton, commemorating Commonwealth land and air forces whose grave is not known, are men of 5th Battalion South African Native Labour Corps.

After the ceremony Peter Dickens, the England Branch Chairman said ‘It’s a pretty significant parade for us because in South Africa the Mendi is taking more significance as people understand the contribution of black Africans to the First and Second World Wars. Today we come to honour the nine South African soldiers who washed up on shore in Portsmouth and who are buried here, but for many hundreds more the sea is their grave’.

Dickens went on to say that ‘more and more emphasis is now been paid to the contribution of Africans to the modern freedom of Europe, both in South Africa and here in the United Kingdom.  It is right, fair and long past its due date that these brave South African heroes are now been accorded their much deserved honour and respect’.

The shipwreck has recently been awarded World Heritage and War Grave status and an increasing number of Memorials are testament to contemporary recognition for, and acknowledgement of the sacrifices made by not only the 607 South African Labour Corps men lost that day on His Majesty’s service but also many thousand silent black South African citizens who risked everything to join Europe, ‘like brothers’.