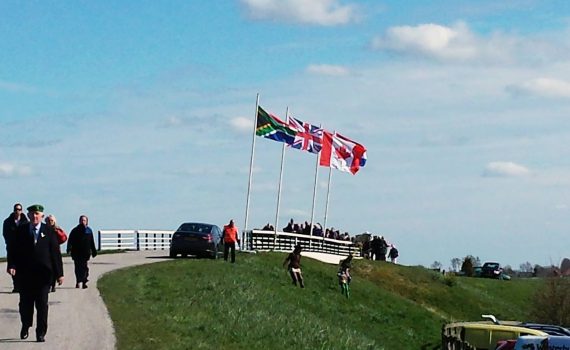 On a remote location in the Netherland’s the South African national flag permanently flutters proudly next to the Canadian, British and Dutch national flags – held high in grateful recognition of the sacrifice to liberate the country during World War 2 and to commemorate a special memorial and site.

This is the re-dedication ceremony of the plaque for the memorial of Lancaster W4888 which was attacked by a German night fighter and crashed on 5 May 1943 on its return from a bombing raid on Dortmund with the loss of six of the seven crew.

The South African connection is the pilot, Nicholas James Stanford (RAF 80378) who was born in South Africa in 1915 and enlisted in 1941 in Salisbury, Rhodesia. After his training he arrived at 101 Squadron and flew several operations.

The re-dedication of the plaque, occurred in Workum (Vriesland) in the Netherlands today under the auspices of Workumer Verzetsmonument on the 16 April 2015.

A beautiful protea wreath was supplied by Colonel Fondse – and was laid in a joint ceremony with Andrew Bergman – it really did South Africa proud and it was an immeasurable honour for us to be able to participate in such a fitting and decorous ceremony.

It is also most heartening to see the way that the town of Workum has ‘embraced’ this sad episode in their history, and continue to honour our fallen airmen “who fought for freedom and justice”.

The clearly deep impression it all made on the men’s relatives – in the knowledge that the ultimate price paid by their ancestor is not forgotten – was pure gold!

This is just some of the fantastic work been by the SANDF Defence attache to Belgium/Brussels EU – and to Colonel Maryna Fondse and her team and our sincere thanks must go. On days like this it makes us all eternally proud to be Legionnaires.