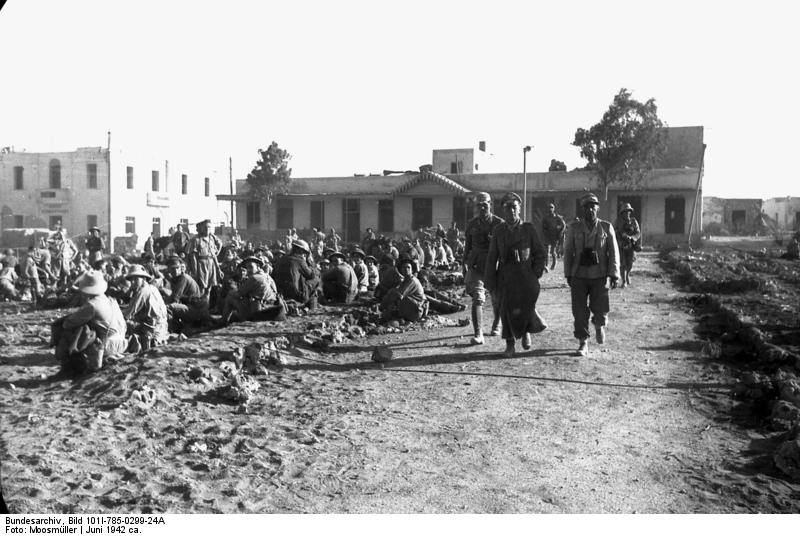 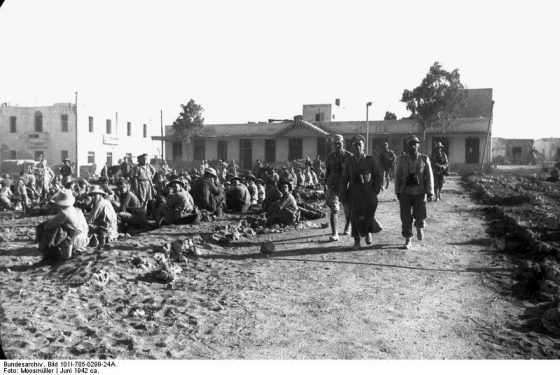 Fascinating and uncommon photo of victorious German troops ba
gging South African prisoners.  Here the German Afrika Korps Commander  – Field Marshal Erwin Rommel is seen inspecting South African and British Prisoners of War (POW’s) after the fall of Tobruk in World War 2.
This account in the South African archives, written/edited by Brigadier Peter Young tells a pretty full story of the South African command of Tobruk and capture:
In 1941 the Australians had held Tobruk for 9 months, until Rommel’s withdrawal to the west. That winter the Middle East Command in Cairo had decided that without naval support it would be impossible for the Tobruk fortress ever to be held in isolation. London had been informed and had – they thought – agreed, but on 15 June 1942 Auchinleck received a telegram from the Prime Minister, “Leave as many troops in Tobruk as are necessary to hold the place for certain.” At length a compromise was reached. Tobruk was to be “temporarily” invested while a new strike force was built up near the frontier.
The main part of the garrison was to be formed by the 1st South African Division with General Klopper – a major general of 1 month’s standing – named commander of the stronghold. The port’s physical defenses, while not in good shape, were hardly weaker than they had been in April 1941. The barbed wire, tank traps and well-placed gun emplacements were still there. Equipment was, if anything, a bit better.

There were 2 partial medium-artillery regiments and the garrison was strong in field artillery. Although there were no anti-tank regiments, there were about 70 anti-tank guns, including 18 6-pounders as well as 18 37mm anti-aircraft guns and a number of Bofors plus about 55 tanks. The strength of the garrison was about the same, some 35,000 men. There was important difference, and it was one which Klopper, none too sure of himself or his position, was ill-equipped to deal with: this time the defending troops were exhausted, their morale was lower, and the camp was filled with a feeling of insecurity and impermanence.