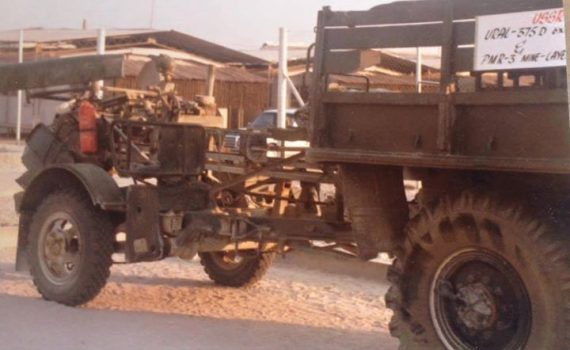 In case you are wondering why Angola is one of the most mined countries in the world, well this captured Soviet hardware goes some way to explain how mining land mines on an industrial level can be done.

Here we have the Soviet manufactured PMZ-4 Minelayer Trailer. Originally designated the PMR-3 “Pricepnoi Minnyi Raskladchik” meaning “towed mine layer (surface)”, this apparatus was the first Soviet minelayer capable of burying mines as well as laying them on top of the ground. It consists of a single chute and a plow attachment. The attachment provides the option of burying the mines or depositing them on the surface of the ground. The PMR-3 equipment designation was later changed to PMZ-4 “Pricepnoi Minnyi Zagraditel” meaning “towed mine layer (buried)” as this designation was more accurate in describing the task carried out by this piece of equipment.

The type of mines laid by this apparatus were the Soviet TM-44, TM-46, TM-57 or TM-62 series anti-tank mines. The mines could be spaced 4 to 5,5m apart depending on the control setting. If buried, the mines are placed at a depth between 6-12 cm while the vehicle traveled along at a speed of 5km/h. The trailer on its own weighed 1.8 metric tons. The towing vehicle could carry 120 to 300 mines depending on the capacity and type of vehicle. The SADF captured one of these trailers in Southern Angola during Ops Protea in 1981. The captured PMZ-4 minelayer trailer is seen pictured here while on display to the public at Oshakati.