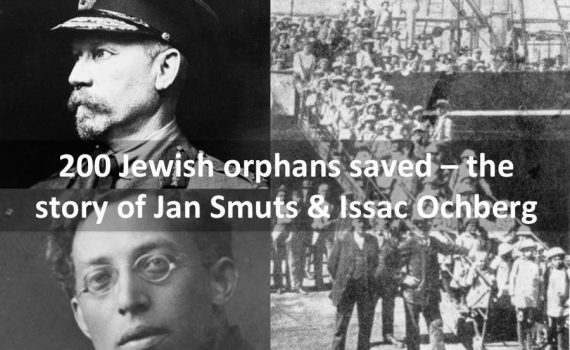 You might remember heroic figures like Oskar Schindler (the famous “Schindler’s List”) who, during World War 2, rescued groups of Jews from certain annihilation. But did you know Jan Smuts also played a significant role in rescuing 200 Jewish orphans from the Ukraine in 1921? Here’s a little bit of unknown history involving an unlikely South African hero, Isaac Ochberg, and it’s one we can all stand proud of.

In the early 1920s, reports trickled through to South Africa of tragic forces occurring in the Ukraine. Following the collapse of the old Czarist Empire in 1917, rival Red and White armies were fighting for control. Although the battles did not start out as particularly anti-Semitic, the Jews’ condition deteriorated.

Famine was followed by typhoid epidemics for the entire population, but it was made worse for the Jews by pogroms. Ukrainian and Polish peasants joined forces with reactionary military forces to massacre Jews wherever they found them inside the Pale of Settlement.

In despairing letters smuggled through enemy lines, Jews begged their cousins in South Africa for help. These pleas immediately stirred South Africa’s Jewish communities. People asked at meetings across the country if at least the children could be rescued from the Ukraine. Before any organisation could step in, generous offers of financial and other assistance were made by Russian-born Cape Town businessman Isaac Ochberg.

Two questions became critical: How could the orphans be rescued from a war-torn region, and would the South African government create any difficulties in admitting them? Ochberg quickly met Jan Smuts, prime minister between 1919–1924, who gave the children entry visas. Smuts could have sunk the rescue plan in an instant, had he chosen to. His support was essential and warmly welcomed.

As reports of the Jews’ plight continued to arrive in South Africa, the size of the tragedy became clearer. 100,000-150,000 Jewish men, women and children were slaughtered by Ukrainian nationalists and another 400,000 Jewish orphans were starving. The next step was for someone to travel to Eastern Europe and make arrangements on the spot. Ochberg agreed to go. For two months Ochberg travelled by train, wagon and on horseback around the Pale, looking for orphaned children. The Ukrainian children knew only that “The Man From Africa”
was coming and he was going to take some of them away to a new home, on the other side of the world.

Ochberg’s worst problem was how to select which children to take and which he had to leave in Eastern Europe. So he decided to choose eight children from each institution, until he reached a total of exactly 200. Since the South African government required that the children had to be in good physical and mental health, careful selection was essential. In addition, only those who had lost BOTH parents were accepted.

In Pinsk alone, so many children had been orphaned that 3 new orphanages had to be opened. At first, Pinsk was so isolated by the fighting that the children were dependent solely on their own resources. There were no blankets, beds or clothes. Typhus broke out in one of the orphanages and the pogroms raged for a week at a time. As order was restored, food supplies began to trickle in, first from Berlin and then from the Joint Distribution Committee.

Ochberg moved from town to town, visiting Minsk, Pinsk, Stanislav, Lodz, Lemberg and Wlodowa, collecting orphans. How did he get the children out – on wagons.

Three months later, with the 200 children in London, he wrote to Jan Smuts in South Africa: “I have been through almost every village in the Polish Ukraine and Galicia and am now well acquainted with the places where there is at present extreme suffering. I have succeeded in collecting the necessary number of children, and I can safely say that the generosity displayed by South African Jewry in making this mission possible means nothing less than saving their lives. They would surely have died of starvation, disease, or been lost to our nation for other reasons. I am now in London with the object of arranging transport and I hope to be able to advise soon of my departure for South Africa with the children.”

A tremendous reception awaited the orphans when they came ashore in Cape Town. So large was the group of children that the Cape Jewish Orphanage was unable to house them all, so 78 went on to Johannesburg.

Ochberg died in 1937 while on an ocean voyage, 59 years old. He was buried in Cape Town at one of the largest funerals ever seen there. Ochberg left what was then the largest single bequest to the Jewish National Fund. The JNF used it to redeem a piece of land in Israel called Nahalat Yitzhak Ochberg – which included the kibbutzim of Dalia and Ein Hashofet.

An Ochberg dedication ceremony took place at Kibbutz Dalia on 19th of July 2011. For the thousands of descendants of his orphans, he is the reason they are alive.

Over the years various projects and films have been compiled, many of the original orphans’ children and grandchildren have been traced and have honoured Ochberg’s memory, South Africa’s very own “Oskar Schindler”.

Content and article sourced from The Jerusalem Post from an article by Lionel Slier 07/18/201. Researched and posted for the South African Legion by Peter Dickens.